Ed note: This is a cross-post from the AYAW Blog.  You can find the original blog post here. 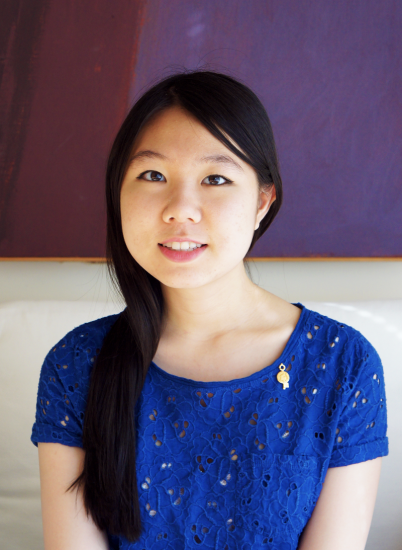 This week’s interview is with National Student Poet and Southeast Representative, Aline Dolinh!

Claire Lee: Hey! How’s your summer been? What have you been up to this summer, in terms of NSPP summer events?

Aline Dolinh: I’ve had a really great summer so far, though I’ve been missing my four fellow poets a lot. I was away from home for a month to attend Governor’s School for the Humanities, was a counselor at a kids’ debate camp, and I’m actually headed out to sunny California for the last week of August. In poetry-related activities, I’ve continued working on my service project and I actually had the chance to listen to the poet Nikki Giovanni speak back in July as well as talk to her briefly afterward—I not-so-subtly promoted the NSPP to her and offered her one of our matching t-shirts.

CL: Hahaha, that’s great! What were some of the major NSPP events you participated in? Which was your favorite, and why?

AD: This year, I had the chance to visit Frankfort for the Kentucky Writer’s Day celebration, which was a completely new experience for me. Kentucky is a state that I think defies a lot of outsiders’ preconceptions—it’s filled with the kind of magnificently vast, open space that you don’t get to see living in a sprawling suburb like mine, and the poetry community there is so tight-knit it feels almost familial. I had an amazing experience there getting to read alongside Kentucky’s past poet laureates and even befriending some of them (Frank X. Walker, the current Kentucky poet laureate, was one of the friendliest people I’ve ever met, in addition to being strikingly talented—he bought me a pin as a gift before even meeting me). I got to know several members of the Kentucky Arts Council as well, who showed me everything from the best restaurants to a family-owned coffee shop. While I was there, I also lead a found poetry workshop at Western Hills High School, which was a lot of fun! I don’t think the experience I had in Kentucky could have been replicated for anyone else, which speaks volumes about how special this program is—I think it reflects the fact that poetry’s power is in its ability to transcend boundaries and connect people while simultaneously speaking to something slightly different in everyone.

CL: Yeah, the program is really great at what it does and what it offers to individuals and communities. In that regard, what was the highlight of your year as a National Student Poet?

AD: In general, I really treasured the connections I made—I loved leading workshops because of the chance to interact with such a wide variety of students, from non-native English speakers at my high school to fourth-graders in Harlem, because they really made me conscious of the idea that everyone can be a poet (even if they don’t think of themselves as such). My favorite thing about the NSPP is the people that it’s helped me meet, from those students to the amazingly hardworking staff who made this award possible to my four fellow poets, who are without a doubt some of the brightest and most beautiful people I’ve ever met. We came together as a group from day one – it sounds cheesy, but we definitely had that metaphorical “spark” they speak of when people talk about connection, and we’ve managed to keep in touch and support each other throughout the summer despite being scattered across the country. You’d be hard-pressed to find friends like them anywhere.

CL: What was one way in which your year as a National Student Poet changed you? In other words, what was the biggest takeaway for you?

AD: I realized this year that truly anyone is capable of becoming a poet, which I think is particularly powerful. The sheer spectrum of experience that I observed in classrooms was extraordinary—I was able to work with students who had grown up speaking no English at all to high-schoolers who were already in love with poetry to third and fourth graders who didn’t even think of themselves as writers at all. The fact that all of them were capable of creating such vibrant and diverse work, no matter if they thought of themselves as “poets” or not, really resonated with me. It made me recognize that poetry isn’t close to dead, not even a little bit—as long as it still belongs to our collective consciousness, it’s still overwhelmingly alive.

CL: Wow, that sounds like an amazing experience. Were there any difficulties or obstacles that you encountered?

AD: I think one of my biggest challenges was figuring out what exactly I wanted to accomplish. As the youngest poet, I was definitely a little intimidated at first and didn’t want to seem out of my depth! I went into the year with a lot of ambition and energy but I wasn’t really sure where to aim it—and outside the bubble of poetry paradise that is the NSPP, outside organizations didn’t always grasp what the program was or why it was important. I think my experience forced me into adapting quickly to these kinds of situations—even when you can’t initially get through to people, there’s almost always a way in if you try communicating differently.

CL: If you could go back and change or do-over one thing about your year as a National Student Poet, what would it be and why?

AD: I’m not sure if it’s a regret, but I always found myself hating how brief all the event experiences seemed—the days I spent with my fellow poets were undoubtedly some of the best memories in my entire life, but to me they always passed too quickly. I also didn’t attend the Aspen Ideas Festival with them this summer because I had a prior engagement that wouldn’t budge, and in an ideal world I would have been right alongside them in Colorado. I definitely wouldn’t take any part of this year back—if anything, I just wish it was longer so we could have a little more time together!

CL: I know! When you look back on the year, it feels like it went by too quickly, which is a bummer… But it’s summer! What are you currently reading? Do you have any fun summer recommendation books?

AD: I know I’m late to the party, but I just picked up Americanah by Chimamanda Ngozi Adichie and I love it—it’s incredibly observant and poignant while also being funny. I’ve also been reading a lot of nonfiction, which might sound dry and scholarly, but it’s really not! In particular I’ve really been loving The Tigress of Forli by Elizabeth Lev, which is a super-engrossing biography of Caterina Sforza, who was an infamous Renaissance-era Italian countess. And in terms of poetry, I’ve been picking up a lot of bits and pieces—lately I’ve really been enjoying Tina Chang, who is a great storyteller and always seems to have a sense of history intertwined with her poems, and Anna Akhmatova, whose work is a blast from the past that I’ve just started getting into. Her works tend to be short but I think they always feel lovelier because of their brevity.

CL: Do you have any last thoughts you want to share with us?

AD: I just want to reiterate that I’ve made some friends for life and accomplished things that I had no idea I was even capable of before I got this opportunity—it’s one of those things that sounds too good to be true, almost infomercial-testimonial fake until you’ve actually lived it.  For anyone who does have doubts about submitting their work or doesn’t think they’re good enough—what do you have to lose by trying? I had no idea that the handful of poems I wrote in freshman year would have brought me all this.

The President’s Committee on the Arts and the Humanities, Institute of Museum and Library Services and the Alliance for Young Artists & Writers partner to present the National Students Poets Program, the country’s highest honor for youth poets presenting original work. Each year, five National Student Poets are selected through the prestigious Scholastic Art & Writing Awards for a year of service as poetry ambassadors, each representing a different region of the country.