On September 21, Nickelodeon went completely dark, taking programming off the air on all channels and shutting down its websites from 12 – 3 p.m. to reinforce the simple message: get up, get out, and go play! As one of television’s leading entertainment brands for kids, Nick has promoted health and wellness efforts during Worldwide Day of Play (WWDoP ) for the past 10 years. This year they took over the Big Apple, hosting health and wellness-themed public events across New York City in iconic locations including the Intrepid Sea, Air and Space Museum and Union Square. These events led up to the flagship event held on the Nethermead in Brooklyn’s Prospect Park. 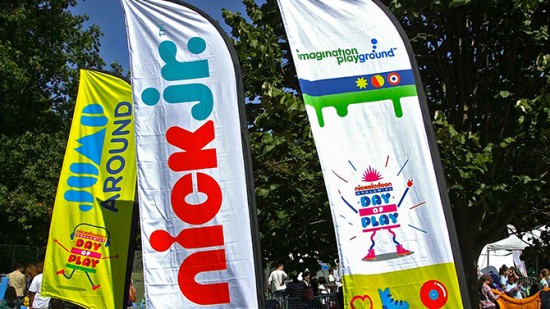 This year’s WWDoP event partnered with the Association of Children’s Museums (ACM) and more than 30 national and local partner organizations, including, the NFL, NBA, USTA, Boys & Girls Clubs of America, and YMCA of Greater NY, among others. ACM’s Let’s Move! Museums, the Brooklyn Children’s Museum, Long Island Children’s Museum, and the Children’s Museum of Manhattan, teamed up with Imagination Playground to provide kids with a play space that encouraged learning, social development, movement, and fun! Imagination playgrounds are mobile play systems made out of blue blocks that can be pieced together to create unique play spaces. 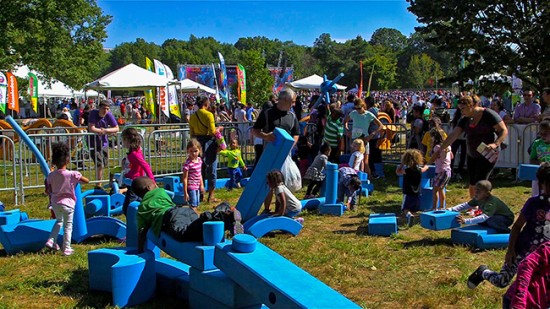 Children’s museums across the country also hosted events in their hometowns. The Stepping Stones Museum hosted an action-packed day with free museum admission and activities throughout Mathews Park. The event featured outdoor field games, interactive sports and fitness demonstrations, awesome educational activities, and live performances – all for free! Experts from the community and other sponsor organizations were on hand to provide ideas about ways families can take charge of their health.

Check out the full list of participating Let’s Move! Museums and Gardens that lets kids do what they do best – play!