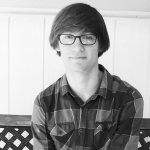 Today, we introduce you to Miles Hewitt of Vancouver, Wash., whose love of poetry is nearly matched by his great interest in songwriting and music. He finds inspiration in a variety of writers, from James Joyce to Alan Ginsberg to Bob Dylan. As passionate as he is about music, he prefers to see poetry written rather than spoken aloud, because it allows the readers to appreciate punctuation and visual form.

Miles was a special guest reader at the Idaho Commission on the Arts “Coasts of Idaho” reading on April 6. On April 20 and 22 he facilitated an At Home at School poetry workshop at Washington State University in Vancouver. The participants in the workshop presented their work at Miles’s high school, the Vancouver School of Arts and Academics. Below is Miles Hewitt’s “Orpheus.”

& in between passionless crimes—
(so for the lack of humanity,
the careless abandon
and the forgoing of burden)
I looked into your eyes & thought

& you smiled
& asked me
what I was thinking about

but I wasn’t lying.