A Vision for the Public Library of the Future

I recently had the pleasure of attending the Aspen Institute Dialogue on Public Libraries.  With support from the Bill and Melinda Gates Foundation, the dialogue is a multi-stakeholder forum to explore and champion new thinking on U.S. public libraries, with the goal of fostering concrete actions to support and transform public libraries for a more diverse, mobile, and connected society.

The Aspen Institute Dialogue on Public Libraries working group gathers for a round table discussion.

The Aspen Institute, in beautiful Aspen, Colo., provides a magnificent setting for both peaceful contemplation and engaging conversation. The discussions were stimulated by the great thinking of John Seely Brown, internationally known expert on learning styles, Reed Hundt, former Federal Communications Commission Chairman and broadband expert, and many other highly-experienced and thought-provoking participants.

During the initial sessions, the state of libraries and the world around them was thoroughly reviewed.  How is the traditional role of the public library changing in the digital age?  How will the ever-present digital disruption impact the role of public libraries in their communities?  What is the 21st century learning ecology and what role can libraries play?  Public libraries have always been involved in civic ecology but what will that look like in the digital world?   Many new service paradigms were posed— the challenge is to determine the responses! 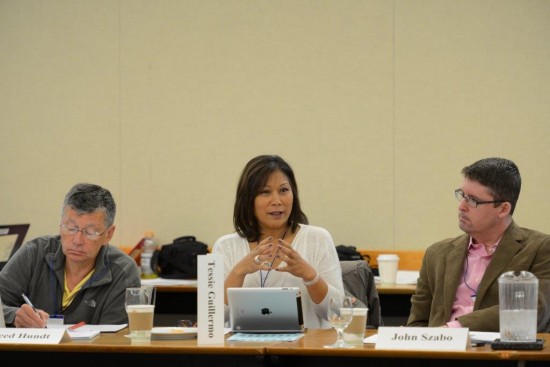 The participants spent a significant amount of time and energy in working groups focusing on three major themes: the library as place, people, and platform.   The library as place includes considerations of both physical and virtual space and how those spaces impact library services and user engagement.  The library as people centers on building human capital and the library’s role in the deeply varied learning environment, both traditional and digital. The library as platform demonstrates the framework that the library can provide for individual and community discovery, creation and sharing.  Each of the working groups produced a framework document that will be used to create a white paper integrating and documenting the great thinking and thoughtful discussion of participants.

The Aspen gathering was just the first step in this important exploration. There will be further opportunities to contribute to the formulation of a renewed vision for public libraries. We all want to identify ways that communities can leverage investments in these essential public institutions to build stronger information ecosystems and forge new partnerships for achieving national and local civic goals.  I will continue my involvement in this effort and keep you informed through additional reports.