"When you give teens opportunities, and especially meaningful opportunities, they will exceed your expectations. It's part of that larger youth development project."
-Shelia Schofer, Coordinator of Young Adult Services at the Brooklyn Public Library

A Commitment to Serving the Needs of the Diverse People of Brooklyn
One of the goals of the Laura Bush 21st Century Librarian Program is to attract a new generation of diverse and creative people to librarianship. With 37% of its community foreign born and 47% speaking a language other than English at home, the Brooklyn Public Library serves one of the most diverse areas of the U.S. The BPL's innovative Multicultural Intern Program (MIP) was designed with this diversity in mind. The three year program's goal was to expose teens from a range of ethnic, cultural and linguistic backgrounds to library careers through structured paid internships. Thanks to the interns' range of backgrounds—year two's group of 60 speaks 19 languages fluently—interns and staff were able to work together to reach out to lower-income new Americans and recent immigrant communities. Teens worked on a variety of projects ranging from work as translators to designing library programming like weekly Chinese language story hours. 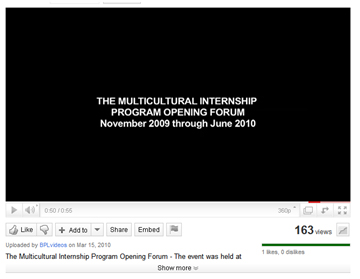 Mentoring, Open Communication and Community Involvement
Kerwin Pilgrim, Coordinator of Business and Workforce Development, feels that much of the success of the project rests in "paying attention to communication and trying to change things as we go along to make the program better." Dialogue between the library and teens started with information sessions on the program prior to the application process. Staff made sure that students knew the library was looking for real community involvement—this wasn't just a job. Once selected, students were paired with a staff mentor at their branch.

"The whole program is set up to encourage that positive feedback loop of sharing ideas and keeping in touch," says Elizabeth Lewis, Director of Literacy Program & Volunteer Resources. Both students and mentors expressed interest in sharing day-to-day experiences with the group, but coordinating the schedules of 50 students and their mentors proved to be a challenge. Instead, program coordinator Jennifer Thompson relied on variety of tools for communication including email, a blog and an internal wiki. The wiki, with its ability to be updated by all program participants, quickly became an online "social gathering place."

Teens Aspire to Careers in Library Science and Become Community Leaders
The program has inspired the entire library staff. "It pushes other librarians to embrace the concept of listening to what teens want even if they don't have interns at that branch," remarks Elizabeth. The biggest impact, however, has been on the students themselves. "We have a handful that are definitely going to be librarians. The other day I heard one of our first years joking with a friend saying, ‘Well, when I become a librarian I'm going to show you how to do that.’" says Jennifer. For those students who aren't considering LIS careers, the internship has still meant a new dedication to their community through the library. "They want to be a go-to-group," Jennifer explains, noting that many students continue to participate in library advocacy events and book drives after completing their internships.

Interns have also spread the word about the library to other teens in the community, bringing them to classes on college application writing and financial management. For some, the program has created lasting friendships with students from other backgrounds. At the Education and Job Information Center, the program purposefully paired Portia, a very outgoing and savvy student with Ali, a student who, as a recent immigrant, is still learning the ins and outs of the community. "On the surface, if you were to look at them and their interview applications, you would think 'they would never be friends outside of this program’", says Jennifer, but at the library they are, "two peas in a pod."

Mentor-to-Intern Relationships and Full-time Participation Facilitate Success
For institutions hoping to create a similar program in their communities, the staff at the BPL have a number of suggestions. Most importantly, the project needs a dedicated coordinator. "It will not survive if someone is doing this part-time," says Thompson, "I couldn't imagine working a reference desk and trying to run this program."

Mentor-intern relationships are key to keeping interns supported and motivated. Evaluations from year one showed that the students were happiest when they felt they had a say in the projects they were undertaking. As for marketing the program to teens, Kerwin advises, "Deliver a quality program and you will not have problems filling the slots. In the second year we had more applications than we anticipated because of word of mouth...You don't have to spend a huge amount of money on marketing."

Measuring Impact
BPL hired an outside evaluator to conduct evaluations and surveys throughout the course of the project. "Anything the students had comments about or suggestions for, we gave it a shot," said Jennifer. In year two, these comments have meant a greater emphasis on social gatherings and bonding experiences for interns and mentors alike. Whereas year one only had two meetings for the whole MIP group, this year the program team is making an effort to get the group together multiple times throughout the course of the internship.

Planning for the Program's Future. Reaching More Communities through Experience and Best Practices
BPL has already begun considering ways to continue the program beyond the three years funded by the IMLS grant. Additionally, efforts have been made to broaden the program's impact by presenting its success to the public. At the 2010 National Diversity in Libraries Conference, Jennifer's presentation of a poster created by the teens sparked a great deal of interest from other librarians.

She was invited to take part in a panel discussion on multicultural issues at the 2010 New York Librarian Association Conference. Thanks to this publicity, the library has received calls from communities across the country hoping to replicate the program. Currently, the team is exploring the possibility of bringing the third year of teens to the Public Library Association Conference in 2012, allowing them the chance to speak to a wider audience about the program's impact on their lives.