I was thrilled to be able to participate in Dodging the Memory Hole II: An Action Assembly hosted at the Charlotte Mecklenburg Main Branch Public Library in Charlotte, North Carolina. The event brought together journalists, representatives from press associations, and librarians to work together to preserve and provide access to digital news content. 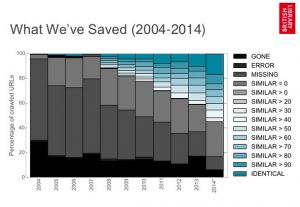 Figure from Andy Jackson's research on the UK Web Archive, after only a few years nearly all the content in the archive is fundamentally different than it was a just a few years before.

As part of the opening of the event, Katherine Skinner of the Educopia Institute shared results of recent work to document the extent to which born digital news, in particular on the web, is being collected and preserved in North Carolina. With the notable exception of student newspapers at colleges and universities, the results of this initial inquiry suggest that few libraries are currently collecting digital news.

Abbey Potter from the Library of Congress NDIIPP program shared recent work from Andy Jackson at the British Library demonstrating just how rapidly website content “drifts,” that is, either changes or is deleted. While there is a need to better understand exactly how content drift and link rot specifically affect digital news content, this research suggests that there is likely little work currently occurring that would have an impact in this area.

What to Preserve and How: 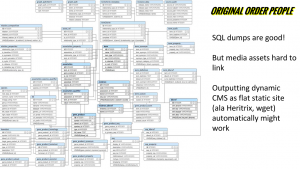 Eric Weig from the University of Kentucky and Ana Krahmer from the University of North Texas both reported out on work they have done to provide access to pre-print PDFs for physical newspapers.There were two primary tracks of discussion on what to preserve and a range of current and potential approaches suggested for how to go about preserving and providing access.

Establishing the process for acquiring these materials, which are born-digital but intended for print, is a challenge. Thankfully, in both cases, Eric and Ana have projects demonstrating how this content can be integrated more or less directly into systems designed for preservation and access of digitized historical newspapers. 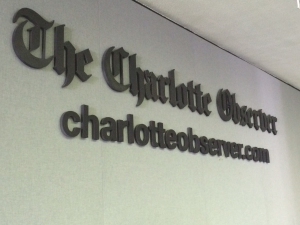 Part of the event involved a tour of the Charlotte Observer which illustrated how extensively integrated the production of print and web news has become.

While there are significant challenges with newspaper PDFs, these documents are just one element in far more complex and challenging sets of digital text and multimedia content in content management systems used by news organizations.

As was suggested during a tour of the Charlotte Observer, in many cases the print publication of a newspaper is more of a distillation of content published on a rolling basis to newspaper websites. That is, the PDF pre-print of a newspaper, while an important source, is just a fraction of the news which is produced and disseminated.

In a session led by Ben Welsh of the LA Times, a team worked through three potential approaches for how to capture the full range of digital news being produced by news organizations. These included 1) accessing raw database dumps from the back end systems, which would include a robust sense of their original order and structure 2) exploring ways to export and exchange the content of stories through standardized formats like NewsML and 3) possibilities for improving the capabilities of web archiving with approaches such as packaging on the web and embedded linked data for stories as offered by schema.org.

Establishing Succession & Donor Agreements
Aside from the technical challenges and opportunities, this area is marked by a significant set of challenges around the agreements and relationships that will ensure long-term access to digital news content. Martin Halbert from the University of North Texas and Jim Kroll from Denver Public Library shared their experiences and perspectives on developing donor agreements that navigated the complex issues relating to ownership and handoffs of both analog and digital news content. This group agreed to continue working together and to work up a set of key considerations for the development of these agreements for other libraries to consult.

Building on Solid Foundations and Creating Common Language
The meeting confirmed and reaffirmed the longstanding relationships that have existed between the news media and libraries. Public, state and academic libraries have played a part in ensuring enduring access to news, and as journalism continues to adapt to the realities of a digital 21st century, libraries do so in parallel. The daily realities of working on deadlines produces an extensive set of documentation of a range of aspects of life in communities across the nation, and libraries have played a key role in ensuring enduring access to that documentation. And, through collaborations and partnerships, forged at events like this, those relationships can continue strong in contemporary society.