Public Record from IMLS Hearing on Libraries and Broadband Released

On April 17, we convened the first public hearing we’ve ever held. We chose this moment because it is full of potential: Tom Wheeler, the Federal Communications Commission (FCC) Chairman, is working to modernize the E-rate, an important source of telecommunications discounts for libraries and schools. And, considering the analysis of FCC data that IMLS released just prior to the hearing, this moment is perhaps of even greater importance than many of us may had realized. More than 90 percent of public libraries, a total of 15,551 individual libraries, have used the discounts provided by the E-rate. 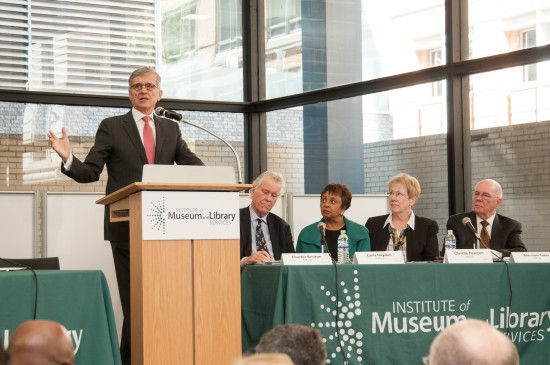 Chairman Wheeler was the first speaker; he pronounced that, “We’re moving from supporting 20th Century technology to 21st Century high-speed broadband technology. It's not just the external connection but it’s how do you get Wi-Fi to the individual in the library.” He noted, “We're bringing the application and administrative process into the 21st Century. The key is not just more money, although if more money is warranted, we will deal with that. But the key is money well spent by encouraging consortia, by creating longer support periods so you can have longer contracts with lower rates, and by establishing a system of reference pricing so that people know that it is a fair process.”

He was followed by Tom Power, deputy chief technology officer for Telecommunications, White House Office of Science and Technology Policy. Mr. Power asserted that, “The whole community has to be focused on education. It's the home. It's the school and it's the library." He affirmed that strategies with the greatest chance of succeeding are the ones that have the support of the whole community: the library, the school, the business community, the mayor or the city council, the county, and the governor. 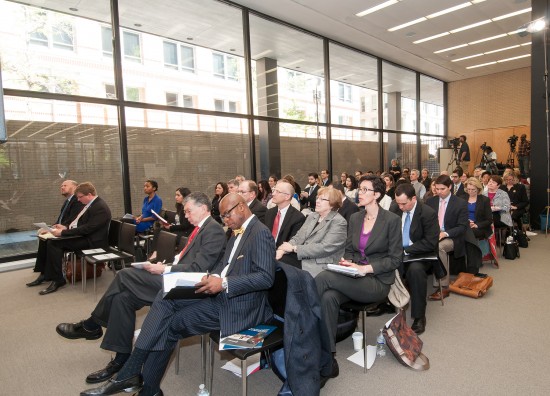 The audience members listen to panel speakers at the IMLS Hearing on Libraries and Broadband.

Our first panel examined what’s working and made a clear statement about the role of libraries in creating opportunity. We heard from Clarence Anthony, executive director of the National League of Cities, who found that the library opened his eyes to new worlds as a young boy in rural Florida. Chris Jowaisas, senior program officer of the Bill and Melinda Gates Foundation, took this idea from an individual to a national and even global perspective as he described how “Bill, Melinda, and Bill Gates, Sr. believed that access to information and technology was absolutely essential to allowing people to live healthy, productive lives, and they felt that public libraries were the best places to provide such services.”

The second panel focused on data and demonstrated that broadband speeds in libraries, even when they get faster, are deemed insufficient to meet current and future needs. Larra Clark, director of the Program on Networks at the American Library Association drew from 20 years of research on library technology to provide a technology snapshot. Miriam Jorgenson, research director of the Native Nations Institute at the University of Arizona and research director of the Harvard Project on American Indian Economic Development, described the special needs of tribal communities, saying, “two-thirds of tribal libraries are in communities where no more than 30 percent of homes have Internet access.”  And independent consultant John B. Horrigan described how libraries are needed to “prepare all segments of society [to be] ready for next generation innovation in information and communication technology,” an idea he called “digital readiness.” He pronounced “digital readiness is the next great social policy challenge for those interested in equity and the Internet.”

The third panel focused on solutions. Omaha Public Library System Executive Director Gary Wasdin kicked off the panel calling libraries the “technology incubators” for cities. He was followed by Connect Michigan Executive Director Eric Frederick who emphasized that broadband is needed in rural communities especially because “education, healthcare, economic development, and all sectors are setting their course and including broadband in a critical role.” Finally, Maine State Librarian Linda Lord called libraries “the gatekeepers, the innovators, and the service providers,” and said, “We must stay ahead of technology so our communities and our citizens can prosper.” 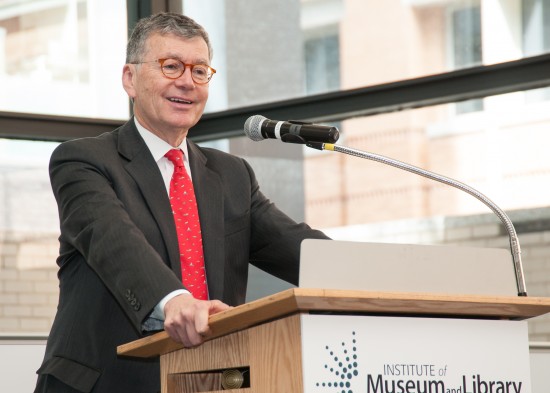 Following the third panel, former FCC Chairman Reed Hundt provided summary remarks. He said, “The reality is this: Internet access in the United States was led by access in schools and libraries. The United States led the world in having a generation come onto the Internet. We have, in fact, in that generation the highest percentage of Internet-savvy people of any country in the world. And we did it on a narrow band, not on a broadband platform. And what Tom Wheeler came and told you today is that now you're going to re-imagine the whole thing on a broadband platform and your vision is going to be realized.”

It was quite an exhilarating three hours!  IMLS has a statutory mandate to “advise the President, Congress and other federal agencies on museum, library and information services.” We will provide the record of this hearing to the Administration, Congress, and the FCC, and we look forward to continuing the conversation.