A remarkable group of 14 young innovators were honored last week as the winners of the 2013 National STEM Video Game Challenge. As one of the national sponsors of the competition, IMLS was delighted to participate in recognizing these middle school and high school students during an award ceremony at the 11th Annual Games for Change Festival in New York City. It was inspiring to see these students from diverse backgrounds and locations across the country gather with their parents and teachers to be recognized for their achievements from a field of nearly 4,000 entries. 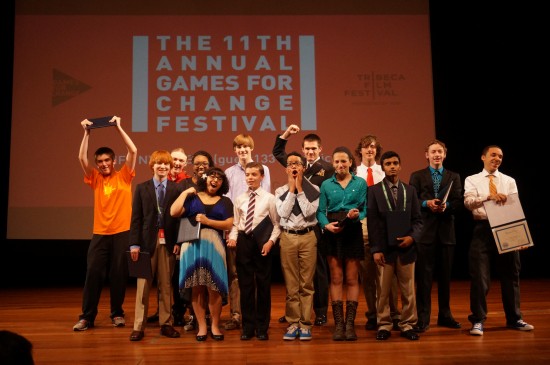 The National STEM Video Game Challenge began in 2011 in response to President Obama’s “Educate to Innovate Campaign” to promote science, technology, engineering, and math education. During the past year, IMLS has worked with the Joan Ganz Cooney Center at Sesame Workshop and other sponsors to expand the capacity of libraries and museums to help students create games and participate in the nationwide challenge. Participation in this event allows IMLS another opportunity to showcase the role that museums and libraries play in making a difference in communities, offering safe and trusted places for young people to gather together, share ideas, learn from mentors and each other, and explore new pathways to learning.

The STEM Video Game Challenge demonstrates the power of video games to inspire learning and to foster a variety of skills ranging from critical thinking to collaboration, problem solving, and systems thinking. The competition builds on the passion for gaming shared by so many young people, taking it to a new level that goes beyond winning and captures the potential to test ideas, experiment with technology, and create something new. Entries in the challenge were judged using three criteria: engaging gameplay, innovative/creative vision, and well-balanced game play.

Talking with the winners after the award ceremony was a privilege and an inspiration for me. These modest yet enormously talented young people are excited about learning and are already harnessing the power of imagination and technology to impact future change. Learn more about the STEM Video Game Challenge and read some blogs that feature the recent awardees.