By Susan Hildreth Director, IMLS I have just returned from Birmingham, Alabama where the National Museum and Library Services Board explored how the nation’s libraries and museums support learning in STEM (science, technology, engineering, and math). In 2014, many IMLS grant applications include a special call for STEM related programming. Because of our focus on STEM, our board heard from several speakers about how libraries and museums are involved in the new movement to create community makerspaces. 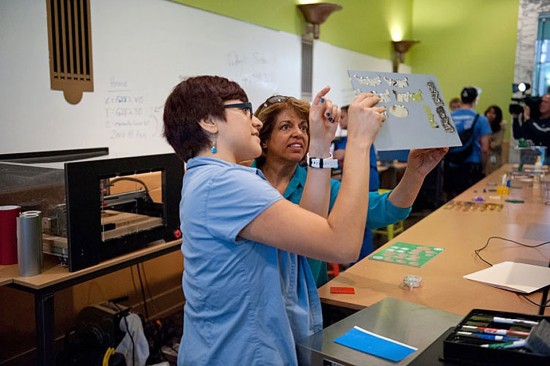 A member of the Chicago Public Library staff shows a patron what can be done with a 3D printer in their Maker Lab.

Interest in makerspaces is skyrocketing and casting libraries and museums as places where people young and old can pursue technical and engineering-oriented activities in a creative, collaborative environment. Activities include electronics, robotics, and 3D printing, as well as traditional metalworking, woodworking, and arts and crafts. We spoke with Dale Dougherty, the founder, president and CEO of Maker Media. His enthusiasm is contagious, and he described how, in a few short years, the makers movement has become both extremely local and global. More than 100 maker fairs have been held in the U.S and the phenomenon has moved worldwide. 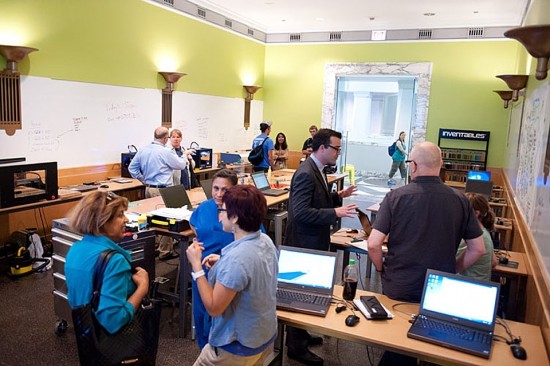 The Maker Lab at the Chicago Public Library

In July, the IMLS-supported Maker Lab at the Chicago Public Library was unveiled during the annual meeting of the American Library Association. At the board meeting, Andrea Saenz, First Deputy Commissioner for the Chicago Public Library, described how the library’s Maker Lab has resulted in new thinking about the library’s role in the community. The Maker Lab is a community-operated workspace where people with common interests, often in technology and science, come together to learn and collaborate. She described how one woman was using the Maker Lab to gain new skills and make a career change. Jane Werner, Executive Director of the Children’s Museum of Pittsburgh, shared creations made by young inventors from the museum’s MAKESHOP®, a space for children and families to make, play, and design using “real stuff”—materials, tools, processes, and ideas. She detailed MAKESHOP’s® growth and a veritable explosion of programming and ingenuity in Pittsburgh that is inspiring others to take up the challenge. The discussion was rich. One of our board members exclaimed, “If you see something cool in a library or museum, IMLS probably had something to do with it!” We are proud of the investments we make in innovation in museums and libraries and look forward to funding more of this good work in 2014. To learn more about IMLS’s grant applications see www.imls.gov/applicants. To find resources that can help libraries and museums create effective STEM programs, see www.imls.gov/about/stem_resources.aspx