For Earth Day, IMLS presents blogs by two scientists who are working on an IMLS-funded project to save salamanders that are in danger of extinction worldwide.

When I was a kid, I knew that flipping over the right log could lead to a magical discovery – the quick flash of a salamander scurrying away in the leaf litter. If my hands were fast enough, I would be rewarded with the opportunity to hold one of these squirming little creatures. Fast forward two decades and now I get to work with salamanders every day as part of my doctoral research at Mississippi State University in an effort to conserve these charismatic amphibians. 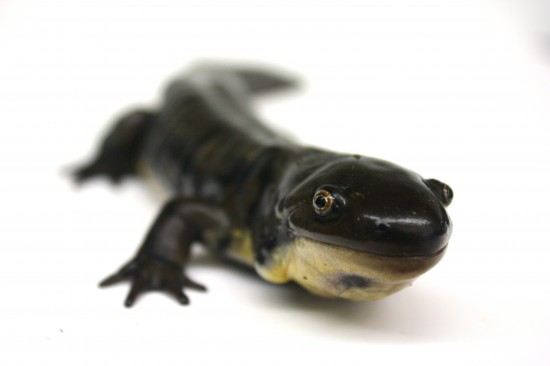 Despite being common in the woods where I played as a kid, almost half of all salamander species are currently at risk of extinction. Like other amphibians, salamanders face many threats including habitat loss, pollution, disease, and climate change. Many zoos have created captive assurance colonies to help save salamander species before they disappear. However, salamanders are notoriously difficult to breed in captivity due to lack of knowledge about their reproduction. That is why a salamander research lab has been developed at MSU in partnership with the Memphis Zoo and funded by the Institute of Museum and Library Sciences. We are studying the reproductive physiology of salamanders in order to better understand how to encourage them to breed.

A former chemistry lab at MSU is now the home of sixty tiger salamanders (Ambystoma tigrinum). These salamanders can grow over a foot long and are found throughout much of the United States. Tiger salamanders are relatively common, which makes them a useful model for our research. We are working to develop new techniques to collect gametes (eggs and sperm) that we can later apply to endangered species. In the wild, tiger salamanders migrate long distances to breeding ponds at certain times of the year. We are unsure exactly what triggers these migrations and subsequent breeding, but it likely involves multiple cues such as changes in rainfall, temperature, and day length. The lack of these cues is a potential reason for their failure to breed in captivity. 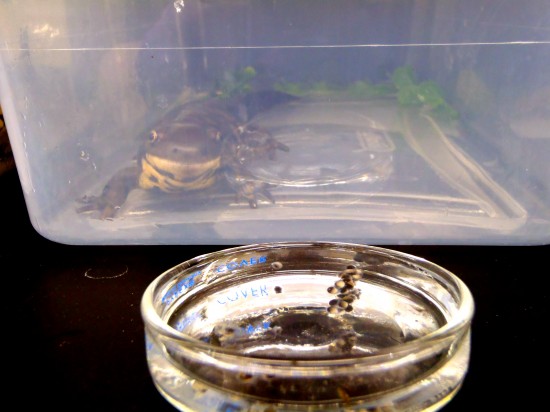 A female tiger salamander pictured with eggs that were collected with the injection of hormones.

In the absence of natural breeding cues, we are learning to stimulate the release of eggs and sperm by injecting salamanders with hormones – substances that act as chemical messengers in the body. Even though most salamanders fertilize their eggs internally, collecting eggs and sperm allows us to perform in vitro fertilization. We have recently successfully fertilized several dozen tiger salamander eggs and are excitedly waiting for them to hatch into tiny aquatic larva. This has rarely been done before and possibly never with this species.

Amphibians like salamanders are important parts of ecosystems all over the world. They play important roles in the environment by keeping insect populations in check. They can indicate the health of a habitat due to their sensitive skin. We can learn a lot from them for the fields of science and medical technology. All these reasons provide the motivation to save salamander species from extinction. For me, it’s all these reasons, plus the magical discovery of a quick little salamander scurrying away from tiny hands in the woods.

About the Author
Hannah Bement is a PhD student at Mississippi State University. She has worked with amphibians for many institutions including the Smithsonian Conservation Biology Institute, Cleveland Metroparks Zoo, and the Panama Amphibian Rescue and Conservation Project. She earned her Master of Environmental Science degree at Yale University in 2012 where her research focused on the reproductive health of urban frogs.

Read more about our research:
http://memphiszoo.org/salamanderconservation