“IMLS-FUNDED CURATORIAL INTERNSHIP- Northwest African American Museum, Seattle, WA.” When I read the title of this post on the University of Washington Museology Program’s internship website in fall of 2009, I was in my first year of the graduate program. In need of income and genuine experience in the field, I clicked to learn more.

Prior to reading the post, I must admit I had no plan to work in an African American museum. I imagined a grand role for myself as a diversifier of a mainstream museum, but how could I champion inclusionary museum practice if I did not have experience working with the stories I aimed to include? So, without any curatorial knowledge or a degree specifically in African American studies, I interviewed to become the third member of a curatorial team still in its infancy.

The Northwest African American Museum (NAAM) had never hired a curatorial intern and Brian J. Carter, Deputy Director, made it clear from the start that the position would be carved as we went along. My goals for the internship were taken into account along with the needs of the department. My desire to be included more in the daily happenings of the museum were honored with an invitation to attend weekly staff meeting as well as being added to the staff email list. These actions helped create an atmosphere where I was able to share my thoughts, make mistakes, and learn to develop exhibits and an exhibition process that worked for the museum. 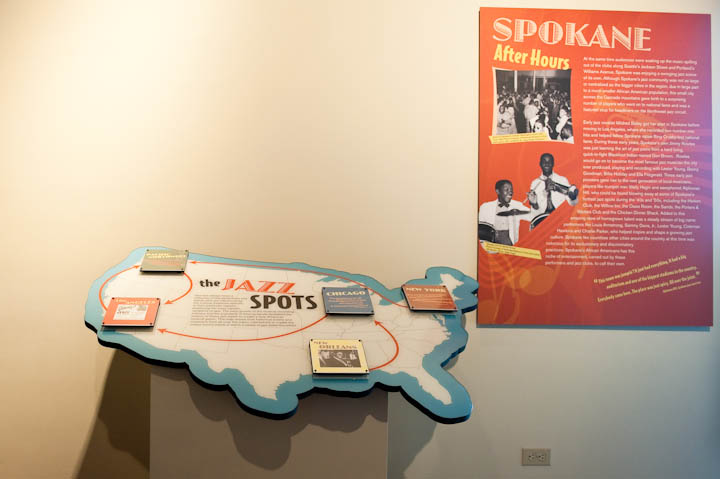 An interactive Chieko completed for After Hours. Photo by Robert Wade.

But it wasn’t a one-way street; they put me to work. Though the internship was advertised as an eight-month commitment with 12 hours of work a week, my tenure is running on three years now.  My last project as an intern was to produce one-third of the content for our exhibit Checking Our Pulse: Health and Healers in the African American Community. I did the research, met with the health care professionals who helped put the show together, purchased needed props, and even drilled them into the tables. Though I recall being overwhelmed at some points, I was fortunate to have this practical experience. At the end of eight months, I felt I had influenced substantial chunks of the curatorial effort at NAAM.

As an intern at NAAM, I became a part of its national and local networks. When the National Museum of African American History Museum came to Seattle to connect with its supporters in the Pacific Northwest, I met the museum’s director and deputy director, Lonnie Bunch and Kinshasha Holman Conwill, and other members of the staff.

I worked with local museum professionals who continue to provide guidance and support after my internship ended. I was able to attend the Washington Museum Association and the American Association of Museum conferences as part of the professional development written into NAAM’s IMLS grant and I continue to attend conferences, like that of the Association of African American Museums, to keep NAAM on the map. Through these meetings, I was able to see more of the museum field and where my goals fit in.

I have now been in a supervisory role for the third generation intern for our curatorial team but I will have to leave those lessons learned for another post. I experienced many firsts at NAAM and I credit the internship for my growth on this career path and for my dedication to African American historical and cultural preservation.

Chieko Phillips is the curatorial assistant at the Northwest African American Museum. She received her MA in Museology from the University of Washington and her BA in History from Davidson College in North Carolina.