From the Bench: These Face Lifts Require Heavy Lifting

Most of the large and important collection of totem poles at the American Museum of Natural History (AMNH) has been on display for more than a century!  As decades have passed and other so-called “permanent” exhibitions have come and gone, these silent sentinels have stood near the entrance of the museum’s earliest building as countless visitors, from royal families to millions of school children, have passed by.

About 10 years ago, the anthropology conservation staff surveyed the 77 monumental poles and carvings from the Pacific Northwest in order to prioritize which pieces would benefit the most from conservation. In 2009, thanks to generous funding from IMLS, we were able to begin to work on some of the neediest cases. We started with the smaller figures—those, less than eight feet tall. Some we could de-install and transfer to the lab for treatment; others were too difficult to remove and had to be conserved in-situ working on scissor lifts.

Giant dust bunnies hid in out-of-reach crevices and thousands of splinters needed to be stabilized. We also had to contend with the well-meaning acts of past restorers. Using modern conservation practices and more stable materials, we were able to carefully reverse old restorations and stabilize the degraded surfaces, ensuring that they can be safely cleaned during routine housekeeping with the goal of maintaining them on open display to the public for another hundred years or more. 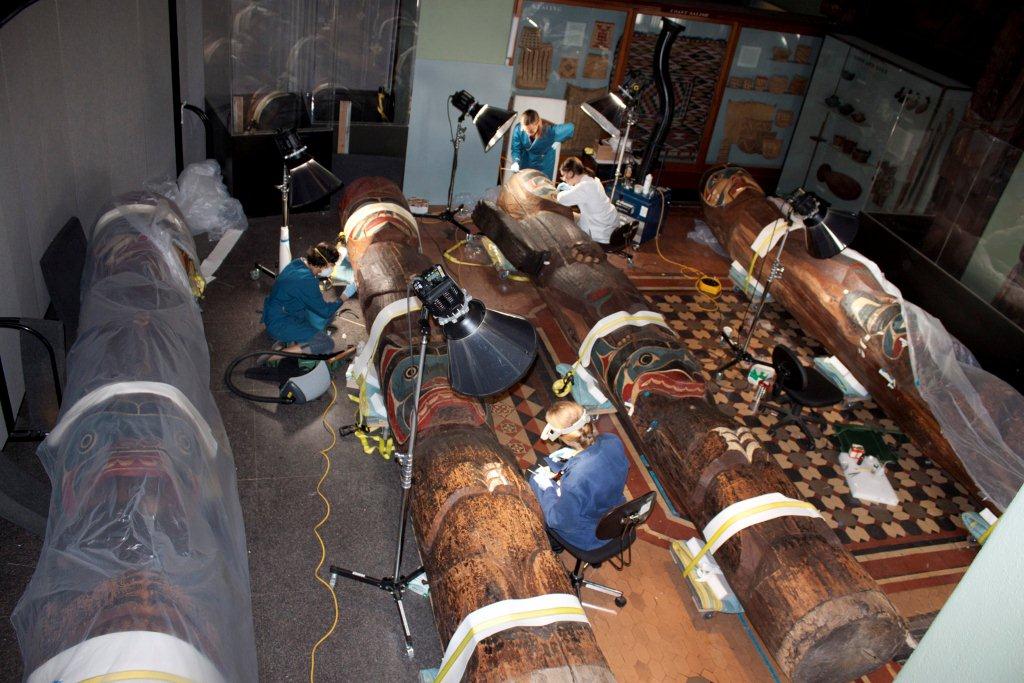 Temporary lab for giant totem poles in the exhibition gallery

During the second IMLS-funded phase of the project, we were presented with the unique opportunity to work on the largest totem poles in our Hall of Northwest Coast Indians. The museum was installing a fire-suppression system that required the temporary de-installation of four monumental house posts. These posts had been commissioned for the museum in 1923 and were carved by native artist Arthur Shaughnessy in the remote community of Alert Bay, British Columbia. They were shipped across the continent and had stood in place, unmoved since their arrival.

Lowering each 1200-1500-pound pole was a feat requiring several “nights at the museum” with Marshall Fine Arts rigging company. Aided by a rotating team of trusty conservation interns and students, we set up our temporary lab in the Northwest Coast Hall and began a task as monumental as the posts themselves.

We are currently continuing our work on other needy cases from the hall and plan to disseminate our findings and treatment techniques in conservation publications soon.