From the Bench: Preserving Civil War Artifacts in Cape Fear

Cape Fear Museum of History and Science’s collection includes more than 50,000 artifacts. Our conservation budget is small, and, for a number of years, we sought ways to conserve some of our most fragile and precious items. In 2009 we received, an IMLS Conservation Project Support grant that let us preserve three items: a rare 34-star U.S. flag; Confederate Major-General William Henry Chase Whiting’s dress uniform; and a Confederate second national flag. All three items had been in the museum’s collections for decades (since 1961, the 1890s, and the 1930s respectively) and we knew that they needed to be conserved for future generations. 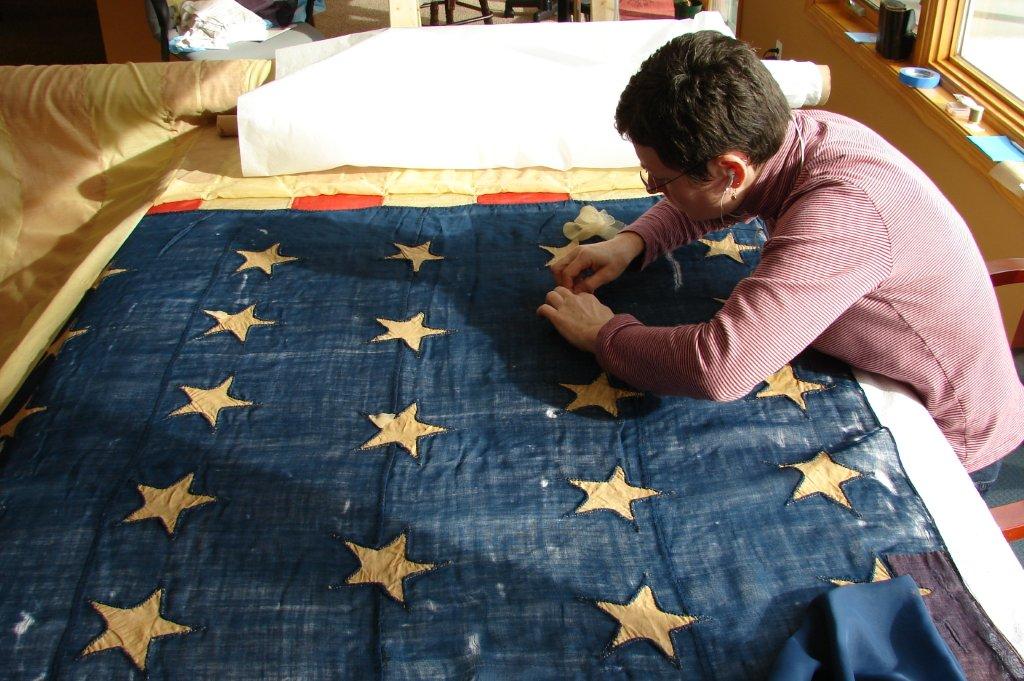 The U.S. flag was donated to the city in 1961 by William Covell’s family. Northern-born Covell left Wilmington after North Carolina decided to secede from the United States. The family story says that his flag was displayed at one of the many meetings held in the city to discuss what to do about the sectional crisis. The flag had tears and weak areas, and the fly end had been folded back and stitched as a means of strengthening the edge.

Major-General Whiting, a West Point graduate and career U.S. army officer sided with the Confederacy during the Civil War, and he commanded the defenses of the Lower Cape Fear region. His uniform’s silk lining was in shreds and needed stabilization in order to be displayed on a mannequin.

The museum’s Confederate flag purportedly flew over Fort Fisher and was captured when the fort was taken by the Union. It traveled north after the war, and was returned to the city by a New York Civil War collector. Like the U.S. flag, the second national flag had tears and weak areas.

The IMLS grant was just the boost we needed; we used it to leverage support within the community. Upon receiving the grant, Cape Fear Museum immediately began to work on the project with textile conservator Patricia Ewer of Mound, Minnesota.  Our city government, several local organizations, and numerous individuals all contributed to the project. We’re also excited to report that we’ve made plans to exhibit the three objects, and that the exhibit Fragments of War, which includes a number of other rarely displayed objects from our Civil War collection, opened October 5, 2012. We could not have displayed the artifacts, even temporarily, without the IMLS grant, and we’re thrilled that we have the chance to put these rare and historically significant artifacts into the public eye during the Civil War’s sesquicentennial.

Editor's Note: This blog post was updated on December 10, 2012 to mention the fact that textile conservator Patricia Ewer of Mound, Minnesota worked on the project.