The excitement generated by the decision of IMLS to award a Laura Bush 21st Century Librarian Grant to the Santa Ana Public Library was enormous. We began to look for ways to expand and extend the opportunities the grant offered our young people. One of the results was our growing confidence that we could successfully apply for other grants to accomplish this.

We applied for a Workforce Investment Act grant for youth and were awarded $150,000. The WIA grants must be applied to youth with serious educational or economic problems, and many of the youngest people we have brought into the Laura Bush program fit that profile. The grant allowed us to create a program to offer extensive training in digital media technology to these young people.

The program – the Seeds to Trees Digital Media Technology Academy - is the brainchild of a partnership between the Santa Ana Public Library and the Rancho Santiago Community College District’s Corporate Training Institute. For the ten months of the program, 20 Laura Bush interns from disadvantaged backgrounds and difficult school situations spend several hours each week in classes in web and graphic design, video production, scriptwriting, digital music production, and marketing, taught by the Corporate Training Institute’s highly qualified digital professionals. They also spend several hours as paid interns at the library, producing videos for the city of Santa Ana’s government information channel, helping with the library’s various social media, and developing skills essential to a 21st century librarian.

The program has also arranged for the young participants to take part in the Youth Entrepreneurship Program (YEP) in partnership with Rancho Santiago Community College. The students are guided in learning the process of developing ideas and products that could one day set them on the path to becoming young entrepreneurs. The teens worked in teams of three on designing a marketing plan for their product or idea. Some surprising and very practical ideas emerged from their efforts, including a Back-off-Bracelet (Pepper spray in a bracelet), a toothbrush equipped with its own toothpaste, and a wireless ear phone. The ideas were all entered in a competition and the winner was honored at the College District’s YEP conference.

These digital media and marketing skills will be essential to all 21st century librarians. Whether our youngsters pursue a career in librarianship or not, this training will provide them with essential skills for creating successful futures in a 21st century workplace. This is just one great additional ingredient that makes the Santa Ana Public Library, the Laura Bush 21st Century Program, and the Youth WIA Digital Media Project part of—to borrow a phrase from a Seeds to Trees Academy member—“a whole system of goodness.” 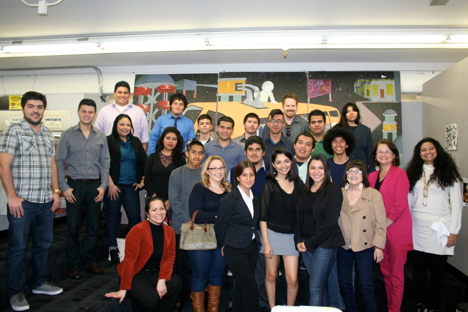 Laura Bush participants and mentors at the WIA Entrepreneurs Presentation.