StoryCorps Captures the Transformation of Libraries and Their Impact on Communities

Each year, IMLS awards the National Medal for Museum and Library Service, to institutions  that demonstrate innovation and savvy in meeting the civic engagement, education and economic needs of communities.   Medal winners receive a visit from StoryCorps, a national nonprofit organization dedicated to recording, preserving, and sharing the stories of Americans from all backgrounds and beliefs.

The first two 2011 winners’ stories have been posted on the IMLS website – listen at http://www.imls.gov/about/storycorps.aspx.

As they visit each winner, StoryCorps staff is blogging about the people, programs and local stories that make these communities so special. Read two of those posts below:

Okay, I must admit that when I think of libraries, the image conjured (as stereotypical and dated as it may be) features cold, fluorescent lighting. Aisles upon aisles of books. The Dewey Decimal System. People hunched over dusty periodicals in an almost religious repose. The Quiet Police, also known as librarians. You get the picture.

So, when StoryCorps Door-to-Door visited our first 2012  Institute of Museum and Library Service (IMLS) National Medal Award winner, the Dr. Martin Luther King Jr. branch of the San Jose Public Library, I was both curious and excited to discover just how much the daunting public institution of my youth has evolved. 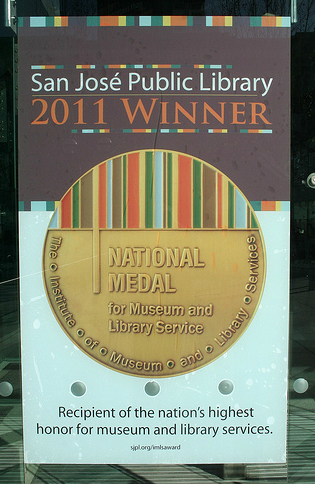 Located in the heart of downtown San Jose, the library’s facade resembles the other sleek glass and concrete office towers, but once inside it reveals it’s true identity: a community hub, campus hangout and epicenter for learning. One look out of an east wing window reveals sweeping mountain vistas, an old bell tower, and San Jose State University academic buildings, a landscape dotted with palm trees.  Immediately impressed, I looked forward to meeting some of the folks who made this place special.

Fortunately, library administrators Jane Light and Ned Himmel set the record straight. The first sign that this wasn’t the library of my past came when Jane quoted Keith Richards: “The public library is the great equalizer.” Very cool.

Jane and Ned reveled in the good old days, when they met 35 years ago as “idealistic library science majors” at UC Berkeley.  Ned recalled Jane’s early dedication to the idea of a public library. ”I thought I wanted to be an academic reference librarian,” Jane said. “Once I got to library school, I realized the possibilities of public library work really changing people’s lives, a place where democracy was practiced. I knew this would be the most exciting place for me to be.”

Ned and Jane described how this truly unique, joint-use library, servicing both the city of  San Jose and San Jose State University, impacts the community.  ”You can’t tell who’s a student and who isn’t a student. You see people of all different ages working away.  This is a true meeting place of life long learning,” Jane marveled.

Heralded as an innovative model of service, patrons enjoy unparalelled freedoms at San Jose Public Library: self check-out, open areas where chatty clusters of students gather to eat and jabber away on their cell phones. It’s all encouraged.  San Jose Public library is one of the first to allow food and drink.  According to Jane, she frequently finds herself defending the library’s unorthodox approach to the naysayers.

“I laugh [and tell them] everything at our branch libraries circulates,” she says. “There are people, myself included, who’ve been known to read a book in the bathtub while drinking a glass of wine!  Why can’t I do that at the library? What difference does it make?  Right now people want convenience, and they want comfort.  Why shouldn’t the library be a place where people come to enjoy themselves, to socialize, to learn, or just to be?”

The ballad of Everet and Barbara

A Thursday morn did Everet Martin and his wife come in,
to have their story, now recorded in the Library-

of Congress, that is. We met Everet and Barbara last month in Weippe, Idaho, when they participated in StoryCorps and shared their touching love story.

Have you ever heard of Weippe? Located on the Gold Rush Historic Byway, it’s the place where the Lewis and Clark expedition first met the Nez Percé in September 1806.

The city is remote, with breathtaking mountains surrounding it, and is home to an Institute of Museum and Library Services National Medal awardee: Weippe Public Library and Discovery Center.

On the day of our arrival, Friends of the Library welcomed Facilitator Mariel Gruszko and me with offerings of camas and smoked fish, the same meal the Nez Percé shared with the Lewis and Clark expedition upon their arrival over two hundred years ago.

A valuable resource to the city, the library and discovery center provides the residents of Weippe with not just reading material but a place for community meetings and research, as well. For the youth in town, this is a place to unwind and enjoy each other’s company, and many times, it also becomes a classroom: When inclement weather proves problematic, teachers shuttle their high school students to the discovery center, where they can safely learn until it’s okay to leave.

Longtime residents of Weippe, the library and discovery center has been a place of enjoyment for Everet and Barbara too. This time, it was a place for them to share their story. At the time of their interview, Everet remembered the first time he met his wife: He and his family moved to Weippe while he was in the third grade, and fresh in his memory was the moment that year when he told his mother that he’d “met the girl [he was going to] marry.” He talked of how Barbara didn’t know he existed until their high school years, acknowledging that until then he was just one of those “icky boys.” Now in their 80′s, Everet and Barbara say that a sense of humor is the main reason they’ve been married for so long, and they spoke with pride about their children, grandchildren, and great grandchildren.

Everet and Barbara’s love story might be considered run-of-the-mill: Boy meets girl, they graduate high school, they marry, work hard, have children; their children have children, and so on. But the light in their eyes, and the way they spoke to and about each other was nothing short of extraordinary. Every love story is an extraordinary one, and every love story deserves to be told, in a poetic ballad or archived in the Library of Congress. Or both.