Early Alexander Graham Bell recordings, once thought to be lost to history, gained national media attention last year when scientists at the Lawrence Berkeley National Laboratory devised a way to hear them.  For curious minds who want to know more, here's the a behind the scenes look at how it all happened.

One of the greatest challenges to the preservation and restoration of historically valuable sound recordings is finding methods to access the content safely and accurately. In recent years considerable progress has been made in the research and development of non-contact optical methods to restore, preserve, and create digital access to mechanical sound carriers. The basic idea is to optically create a digital representation (image) of the sound carrier surface and then extract the audio content by modeling the stylus motion on a computer.

In 2007-2009, the “3D/PRISM” project, funded by IMLS, focused on the  three dimensional imaging of cylinders and discs using confocal microscopy. These systems output standard audio, image, and data file formats supported by libraries and archives.  An ongoing IMLS National Leadership Grant, "Advancing Optical Scanning of Mechanical Sound Carriers: Connecting to Collections and Collaborations" seeks to further advance this approach in a variety of directions and is described in a recent IMLS Project Profile. In one aspect we are applying these methods to a variety of collections, through pilot digitization studies and development of new software and protocols in order to make the technology more accessible and sustainable. The key research partner in this is the Library of Congress.  In another aspect we seek to confront a range of special materials with unique technical challenges, in partnership with a number of institutions nationally and internationally.

As part of the special materials study we have collaborated with the Smithsonian Institution, National Museum of American History, to study a truly unique collection of early experimental sound recordings, created by Alexander Graham Bell and colleagues in the early 1880's.

After Bell's invention of the telephone, he received the "Volta Prize" from the French government.  The prize gave him the financial support needed to create the "The Volta Laboratory" in Washington, D.C., dedicated to research on sound recording, telecommunications, and other technologies.  Together with his cousin, chemist Chichester Bell, and instrument builder Charles Sumner Tainter, the "Volta Associates" embarked on a wildly creative and innovative program to transform sound recording into a practical technology.  The association was active between 1880-1886.  To protect their intellectual property and later to preserve their work, the Association deposited nearly all the materials and documentation from the Volta Laboratory in the care of the Smithsonian Institution.  The Volta Collection includes about 200 sound recordings in an impressive variety of formats and media including wax, foil, cardboard, metal, glass, and plaster.  The Associates experimented with mechanical (grooved), photographic, and magnet recording processes.  Precursors can be found in this collection to most of what later emerged as key recording methods much later on.

Working closely with Smithsonian curators Carlene Stephens and Shari Stout, we chose a small number of records which formed a good representation of the diversity of formats and media created at the Volta Laboratory.  Through the application of the optical scanning methodology developed with IMLS support we were able to restore all of these items to intelligible sound.  The measurements took place over the course of 2011 at the Imaging Laboratory in the Preservation Directorate at the Library of Congress, where we had installed some of the optical scanning equipment.  The results were presented publicly beginning in December of 2011.  The audio examples can be accessed at a website and are also discussed further in a posting and by journalists. 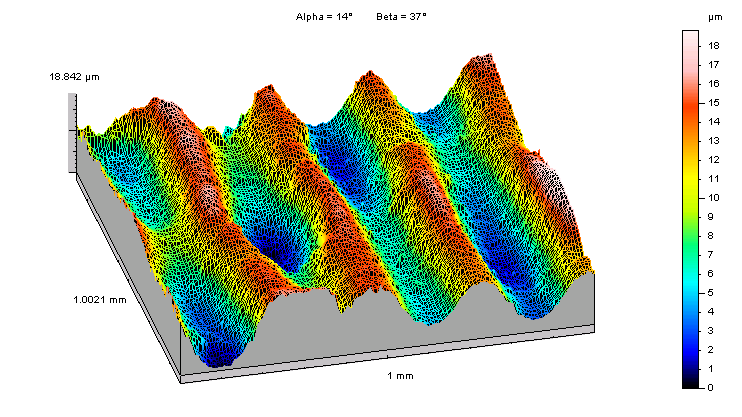 A high resolution topographic map of the surface of a wax cylinder record. A region of approximately 1 square millimeter is shown.

For a scientist, peering into the Volta Laboratory collection is a revelation.  During the second half of the 19th century we see the discoveries and development of sound recording, photography, motion pictures, and both wired and wireless data transmission.  Nearly everything technical which underlies our present information society emerged during this period.  The idea that information could be recorded, in real time, is fundamental to experimental science as we practice it today. Much of this actually gets integrated first in the experiments at the Volta Laboratory. 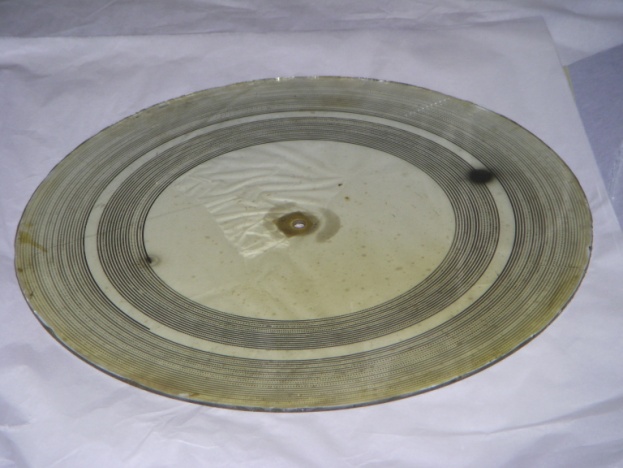 A photographically recorded disc from the Volta Laboratory.

The collection is much larger than the initial items we selected and in many cases presents greater challenges for preservation due to breakage and degradation.  Perhaps some future grants will support the full systematic analysis and restoration of this hallmark in the history of science and technology.  The special materials study described here has shown that the optical approach works well on diverse and unusual examples of some of the earliest experimental sound recordings.