By Abby Swetz
IMLS program specialist in the Office of Strategic Partnerships from March 2004 until September 2011.

IMLS engages in partnerships to help build the capacity of libraries and museums to better serve their communities. One such partnership was The Big Read, a program of the National Endowment for the Arts (NEA) designed to restore reading to the center of American culture. IMLS joined The Big Read to ensure that libraries were central to the program. Big Read grants provide communities with the opportunity to read and discuss a book and host a month-long celebration of outreach and educational programs. Over 950 grants have been awarded, and each grant requires the participation of a public library.

I spoke with Karen Kleppe Lembo, former Director of the Caldwell Public Library (NJ), about their Big Read that celebrated Cynthia Ozick’s The Shawl, a poignant novella about a woman and her niece who survive the Holocaust. Karen firmly believes that The Big Read transformed her library and the way it serves its community.

Why did you choose The Shawl and what partnerships did you pursue for the grant?

Caldwell is just over one square mile with approximately 7,500 residents and is sometimes underestimated because of its size. However, size can be deceiving. Cynthia Ozick’s small but powerful book, with its themes of tolerance, redemption, and recovery, provided a distinctive lens for deep discussions about community.

The Caldwell Public Library partnered with eighteen community organizations, including the West Essex Ministerial Association (which represents 12 congregations of all faiths), the Museum of Jewish Heritage, the Rotary Club, the Kiwanis Club, the Boy Scouts, the Board of Education, Caldwell LIVE , Marian Manor, the Jennings Library at Caldwell College, West Caldwell Public Library, and the Parsippany Public Library. Sixteen schools participated, ranging from nursery schools to college,  including Essex County Vo-Tech School, The Children’s Institute (a school for children with autism), and the Lumen Center at Caldwell College. The Mayor and the City Council were partners and critical supporters.

What types of programs did you initiate?

Our community was so enthusiastic about The Shawl that 253 programs were hosted over three months! Programs consisted of book group discussions; art, music, and film programs; intergenerational activities; Boy Scout and Girl Scout events; street fairs; and even knitting. Especially dear to us were service projects. We collected crayons for the Crayon Project, knitted and crocheted blankets for Habitat for Humanity, and held intergenerational storytelling programs at local senior centers.

Over 1,000 high school students participated in panel programs, including an assembly that featured survivors of the Holocaust and the genocide in Rwanda. Speakers emphasized that intolerance and bigotry are still societal issues and encouraged students to refrain from bullying their peers.

Over 400 people met the author, Cynthia Ozick, and over 1,000 copies of The Shawl were circulated throughout the community.

Did you find the Big Read materials useful?

We received reader’s guides, teacher’s guides, audio guides, and films, which were captivating and professional. They appealed to scholars, students, and lifelong learners. All of the programs incorporated the materials, which were free and could be kept by partners.

What were the residual benefits to your institution after the grant concluded?

Our library gained visibility and credibility as an important community organization and partner. Since The Big Read concluded, we have received several grants from the New Jersey Council for the Humanities and the Library Champion award from the New Jersey State Library Association. The grant also helped finalize a discussion that led to our library being gifted a large collection of photographs from a local photographer. Our new collaborative relationship helped initiate a joint speakers’ symposium with Caldwell College and a local high school. Lastly, we received great media attention, including an article in the New York Times, coverage on a local radio station, blogs, and articles in the local and state newspapers.

The NEA, in partnership with Arts Midwest, is now accepting applications for The Big Read and we encourage you to apply. Guidelines are posted on The Big Read Web site and the deadline is February 1, 2012. 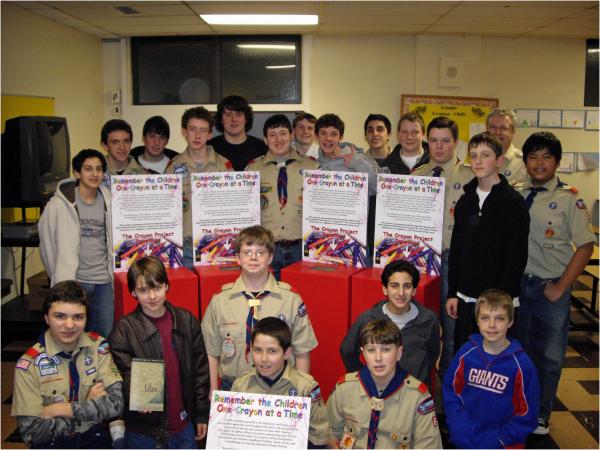 This Boy Scout troop, shown here while working on The Crayon Project, was one of many groups involved in Caldwell, New Jersey's Big Read.