A Place, A People, and A Time: Preserving Native American Heritage

Museum staff and tribal members collaborate for understanding and sharing of the region’s Native American history and culture.

In July 2010, the San Diego History Center was awarded a $133,829 Museums for America grant by the Institute of Museum and Library Services (IMLS) to digitize, catalog, and make web-accessible over 7,000 images in the Edward H. Davis Collection of Photographs and Drawings. These images primarily document the daily lives of Indians in San Diego County in the early 1900s. This funding will make this important collection more easily accessible to the public.Edward H. Davis (1862-1951) came to San Diego from New York for health reasons in the 1885. In 1888, he moved to Mesa Grande in San Diego County’s backcountry and found work as a rancher and fruit grower. During this time, he developed friendships with his neighbors, the Indians of Mesa Grande.

Fascinated by Indian culture, Davis soon began collecting Indian artifacts and eventually amassed a collection so large that he had to build separate quarters for storage. As an avid artist and photographer, he recorded the daily lives of Indians in San Diego County both through sketches and photographs. He also took detailed journal notes in order to document the stories, histories, and ceremonies of the Indian way of life.

Davis’ genuine motivations to preserve and dutifully communicate Indian culture earned him the respect of the Mesa Grande Indians and he was made a ceremonial chief in 1907.  By 1915, Davis had achieved esteem among those studying Indians as well. A representative of the Museum of the American Indian in New York (founded by George G. Heye), purchased Davis’ collection of Indian artifacts and he was later hired to enhance that museum’s collections. As a collector for the Museum of the American Indian, Davis traveled extensively throughout the Southwest, particularly in Arizona, as well as throughout Mexico, purchasing artifacts for the museum and documenting his travels. 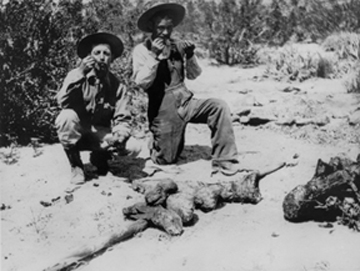 In 1986, the San Diego History Center received Davis’ collection from his granddaughter, Nancy Davis Wilson and although parts of the collection have been made accessible to the public since the 1980s, access to the entire collection has been limited. The History Center’s IMLS grant provides the opportunity to enhance public access to the collection through digitization, the creation of in-depth catalog records, cross references to Davis’ journal entries, and availability of the images and records through the Internet.

As part of the cataloging process, the History Center’s project team of Chris Travers, Project Director, Therese Chung, Project Manager/Cataloger, and Natalie Fiocre, Imaging Technician visited (and at the time of this blog, are still visiting) several of the local bands at reservations throughout the county. In total, the team will hold at least six community meetings to present the images to tribal members and to solicit help in identifying locations, items, and people represented in the thousands of images.  Information gathered at the first of these  meetings has been added to the catalog record. These community meetings have also helped to build relationships between tribal members and the San Diego History Center by providing an opportunity for both the History Center to share the images with the Indian community and for members of the Indian community to share information about the images.

Images from collections such as this one tell only part of the historical narrative but these pieces, taken together, are what define a place, a people, and a time from San Diego’s past.