In the summer of 2009, the board and staff managers at the Children’s Museum of Houston decided to use IMLS’s 21st Century Skills report as a planning framework for our strategic plan. We had just completed our capital campaign and opened our new facility which doubled the size of our museum in March, 2009-debt free. And we were increasing the outreach services that we provided in community based sites that served low-income families. But our board wanted to develop post-expansion direction to move us quickly out of the building-focus myopia and back to what our community really values, which is for us to provide learning opportunities wherever whenever families want them.

A first step was a planning retreat with the board. We identified 6 community attributes that we felt should drive our priorities, ranging from the poverty levels in Houston to the need for parents to be more engaged in their children’s learning.  We found 13 priority issues by conducting the Self Assessment Tool.

Internally, most of us thought we did a terrific job of explaining how important our Museum is. We even showed presentations at monthly board meetings of our programs, and we hosted board meetings at our outreach sites to demonstrate how we were achieving our long range strategic plan. But clearly we weren’t using the right words or data to make a case that we were on the right track for the future-aside from having finished a great new facility with great new exhibits.

Even during the final phase of our capital campaign, I would hear key Houstonians say “I don’t really know what it is the Children’s Museum does.” It kept me up at night…how others were questioning how we measured our success. Some of those Houstonians were going into the planning sessions with us. And some of those people had made significant investment in our expansion. 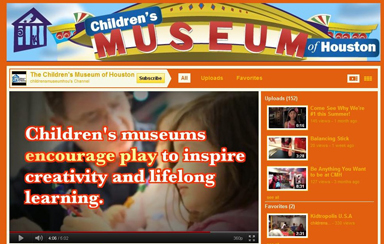 The Community Learning Scan, along with the Self Assessment Tool, helped
board members and staff find a common way  to measure institutional process in affecting
change in our audience.

How we did it:

Did it work? Absolutely! When the bottom began to fall in Houston, we were clear in our thinking and ready to respond. The exercise alone molded us into a more effective leadership and management team. Because the issues were identified for us broadly going into our retreat through the Self Assessment Tool, we felt like we “covered it all.” And we were able to develop a common vocabulary describing what it is that our museum does to make Houston better. And this vocabulary makes sense to our community’s policy makers, centers of influence, and our partners.

We also uncovered some sacred cows. If we are truly going to deliver 21st Century learning benefit to our city, we have to have the talent pool and
resources to do it. The board responded by increasing our budget in program delivery and fully embracing our efforts to reallocate resources, especially in
technology. They knew we had to reinvent ourselves and we had to do it quickly.

As staff, we dropped the projects that we finally admitted were “less-than”, and have driven ourselves as fast as possible to deliver our new vision of impact. Because we have a plan to get there, and the people to do it, we believe that we are going to do it. We also update the plan as actions occur, or needs and opportunities appear. Each year we will update it globally and push the horizon ahead by at least one year, so we can always work with a three-year or five-year outlook. Action is reported monthly to our board, who work beside us to get things done.

We have worked harder, with more creativity, more resources and more sheer enjoyment during this past year than we did while physically expanding our museum during the previous 4 years. Just like we said in our capital campaign “we’re expanding minds, not just walls”.